The brain works like a big computer. It processes information that it receives from the senses and body, and sends messages back to the body. But the brain can do much more than a machine can: humans think and experience emotions with their brain, and it is the root of human intelligence.

The human brain is roughly the size of two clenched fists and weighs about 1.5 kilograms. From the outside it looks a bit like a large walnut, with folds and crevices. Brain tissue is made up of about 100 billion nerve cells (neurons) and one trillion supporting cells which stabilize the tissue.

There are various sections of the brain, each with their own functions: 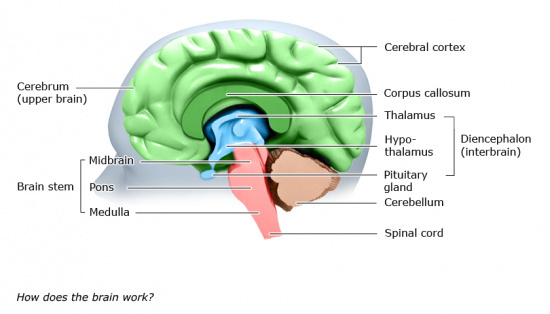 Structure of the brain

The cerebrum has a right half and a left half, known as the right and left hemispheres. The two hemispheres are connected via a thick bundle of nerve fibers called the corpus callosum. Each hemisphere is made up of six areas (lobes) that have different functions. The cerebrum controls movement and processes sensory information. Conscious and unconscious actions and feelings are produced here. It is also responsible for speech, hearing, intelligence and memory. 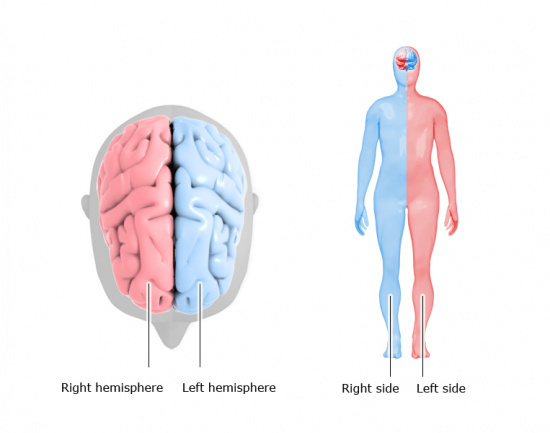 The left cerebral cortex is responsible for speech and language. The right cerebral cortex supplies spatial information, such as where your foot is at the moment. The thalamus provides the cerebrum with sensory information from the skin, eyes and ears, as well as other information. The hypothalamus regulates things like hunger, thirst and sleep. Together with the pituitary gland, it also regulates the hormones in your body.

The brain stem relays information between the brain, the cerebellum and the spinal cord, as well as controlling eye movements and facial expressions. It also regulates vital functions like breathing, blood pressure and heartbeat.

The cerebellum coordinates movements and is responsible for balance.

How is the brain supplied with blood?

The brain needs a steady flow of enough oxygen, glucose, and other nutrients. For that reason, it has a particularly good blood supply. Each side of the brain receives blood through three arteries:

Before the three arteries reach “their” brain region, where they split into smaller branches, they are close together below the brain. In this area, they are connected to each other by smaller blood vessels – forming a structure similar to a traffic circle. The arteries are connected to each other in other areas as well. The advantage of these connections is that blood supply problems in the brain can be compensated for to some extent: For example, if a branch of an artery gradually becomes narrower, blood can still flow to the part of the brain it supplies through these alternative routes (collateral blood flow).

The smallest branches (capillaries) of the arteries in the brain supply the brain cells with oxygen and nutrients from the blood – but they do not let other substances pass as easily as similar capillaries in the rest of the body do. The medical term for this phenomenon is the “blood-brain barrier.” It can protect the delicate brain from toxic substances in the blood, for example.

After oxygen has passed into the cells, the oxygen-poor blood flows away through the veins of the brain (cerebral veins). The veins carry the blood to larger blood vessels known as sinuses. The sinus walls are strengthened by a tough membrane (dura mater), which helps them keep their shape too. This keeps them permanently open and makes it easy for the blood to flow into the veins in the neck.